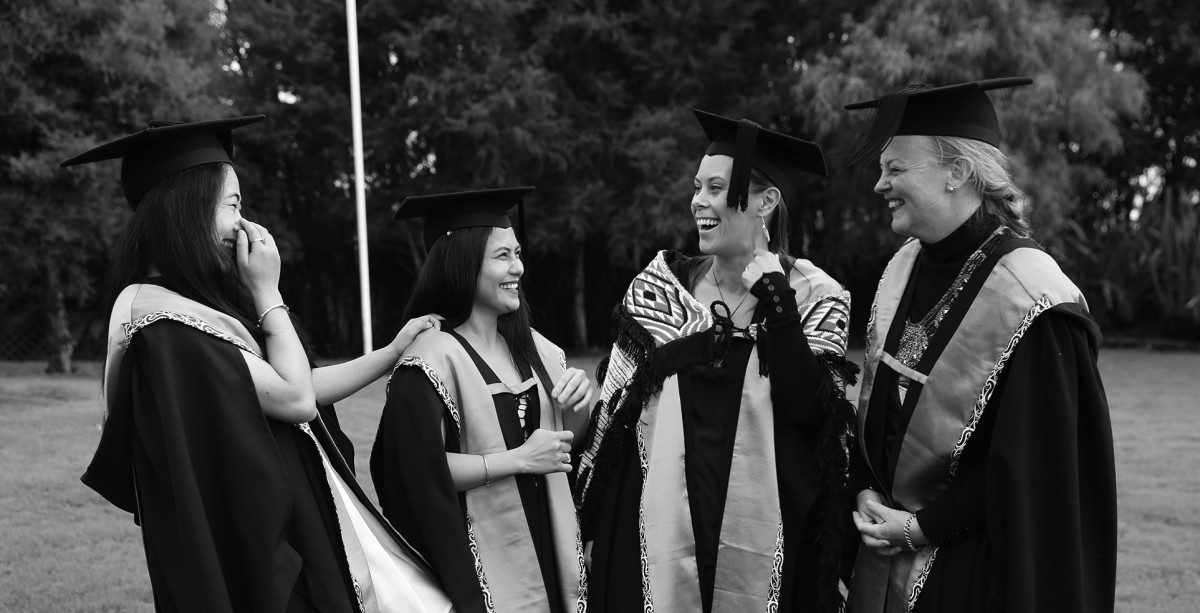 From dreams to reality – at Toi Ohomai’s graduation

From dreams to reality – at Toi Ohomai’s graduation

When 800 students graduated from Toi Ohomai Institute of Technology on 6 April Julia Kennedy from our Monitoring and Crown Ownership team was invited along as a special guest by the Council’s Chair Cathy Cooney.  She was swept along in the parade through Rotorua streets to the packed auditorium of the Sir Howard Morrison Performing Arts Centre where she shared in the joy and pride of families, friends and staff as they celebrated their students’ success.

When 800 students graduated from Toi Ohomai Institute of Technology on 6 April Julia Kennedy from our Monitoring and Crown Ownership team was invited along as a special guest by the Council’s Chair Cathy Cooney.  She was swept along in the parade through Rotorua streets to the packed auditorium of the Sir Howard Morrison Performing Arts Centre where she shared in the joy and pride of families, friends and staff as they celebrated their students’ success.

“By the end of the day my hands were sore from clapping,” says Julia, “but it was a delight and privilege to share the happiness and pride of those graduating – and their obvious affection for the staff who helped them get there.

“Academic staff stood up in support of their students’ achievements and Chief Executive Leon Fourie reminded us that this moment in the educational journey is what educators live for and gives the greatest sense of satisfaction.”

Last week’s event was the first Toi Ohomai graduation to be held at Rotorua. On 1 May it will be a year since the Bay of Plenty Polytechnic and Waiariki Institute of Technology amalgamated and, a few months’ later, took on a new name and identity.  Toi Ohomai is now New Zealand’s third largest institute of technology delivering 150 programmes from 70 locations and with approximately 1000 staff and 14,000 students. Shoppers stop and watch the lunchtime parade through Rotorua

Julia attended three of the four graduation ceremonies on the day which started with an early morning powhiri and took to the streets with a lunchtime parade through the city.

“In the autumn sunshine, shoppers were delighted by hundreds of staff and students in colourful academic robes, the young men who led the parade, the huge Toi Ohomai banner with eye-catching constellation, and the banner bearers in their “Dreams to Reality” T-shirts,” says Julia.

The graduation ceremonies included the first for the new Master of Teaching Early Childhood, as well as the Bachelor of Creative Technologies, the Master of Applied Professional Studies, the Bachelor of Nursing and the Graduate Diploma in Health Studies.  As many families and supporters of the graduands live overseas, the day’s events were live streamed to the internet and photos shared on Toi Ohomai’s Facebook page by the next morning.

Julia recalls the wonderful atmosphere at the start of the afternoon ceremony, the graduation for the Bachelor of Nursing and the Graduate Diploma in Health Studies.

“I knew Chair Cathy Cooney had begun her successful career as a registered nurse and midwife so when it came time for the third ceremony with 150 nursing and health studies students graduating, I knew it was very special for her.” In their beautiful hooded gowns, graduates wait for their turn to go up on stage.

"There were absolutely no spare seats and an excited buzz before the ceremony began.  The front rows were occupied by all the graduates who looked beautiful in their gowns with cobalt blue or jade hoods . Supporters in the auditorium were encouraged to participate, many recognising success with mihi. Not to be outdone, one very proud father yelled out “that’s my girl” to cheers and applause, a cry taken up by other fathers throughout the afternoon.”

One special journey – from child care to surgical nurse

During the day, Julia asked some of the graduates about their learning journey and what was next in their lives.  She found that while most students have already found employment using their skills and qualifications, many had overcome significant obstacles to complete their qualifications.

One story that stood out for her was that of Bachelor of Nursing graduate Tineka Bartlett who spoke at the powhiri of how she became a registered nurse. 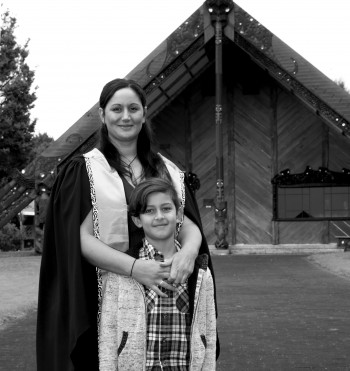 Tineka Bartlett and her son Ariki Jacob, at the graduation powhiri.

“Just over three years’ ago Tineka Bartlett was working in childcare centre on a minimum wage. At the powhiri she spoke with confidence and assurance about the guidance from staff and the way the students supported each other – the friendships she gained, the fun she had, and the hard work and late nights needed to complete assignments.

“Her son, Ariki Jacob, who was three years’ old when she began studying, was with her on graduation day,  and is now a delightful (almost) seven year old.

“Tineka now has a vital role as surgical nurse at Tauranga Hospital and is an excellent role model for her son. In her speech, Tineka recognised the support for her learning journey provided by Toi Ohomai’s Department of Nursing, her colleagues and her whanau.

“So my congratulations go to her and her family for her success.  For me, Tineka embodied the meaning of the name Toi Ohomai and its values – spelt out in the programme for the day: ‘Lift up your sights to the sky, be awakened, be inspired; Aim high and achieve great heights through learning’.”